I was surprised during the pregnancy when my wife announced she wanted to breastfeed the triplets. I found it hard to comprehend that she would be able to produce the milk needed to satisfy three babies. It was to be a massive commitment for Stacey but she was adamant that breast was going to be the best for our premature triplets as they made their start in life.

Stacey loved breastfeeding Frankie, not only from a bonding perspective but as the most natural way to feed them, as she says, it’s what boob’s are there for. I had no problem with it, my wife didn’t have expectations but was determined that it was how she wanted to feed them. She didn’t put pressure on herself and stayed calm around the whole process to begin with, stress can slow a supply down.

I remember well around the 3rd day after they were born, following constant pumping the first drops of Stacey’s milk coming through, it was exiting times. Blakely, the smallest of the trio, at that time was struggling to hold down the formula as her digestive system hadn’t fully developed to tolerate it, so any milk expressed went to Little Blakely.

Soon Blakely was solely on Mum’s milk, tolerating it and strengthening well as a result. Ava was then the first to latch. It was then a case of them all latching before we were able to take them home. I was honestly amazed by the whole event, nature knew what the babies needed and Stacey’s body delivered. It wasn’t always easy, there were times she had to struggle with the pain, but with gritted teeth continued.

There were definitely times I found it hard in the beginning, In that I wasn’t able to help much. That soon changed though as I needed to keep Stacey awake through the night feeds to keep her awake. So we both suffered from the tiredness of the long nights in that respect. To feed all three took around an hour and twenty minutes. By which time it was soon time to start the feeds again. Sometimes she was able to tandem feed. But that wasn’t always possible if she was in pain.

It wasn’t long though after being home that we began giving them expressed milk in a bottle for the last feed of the day. It meant I got to be involved and enjoy those moments together with my wife. And it was a job I loved, it helped me bond with my daughters in those early day’s of adjustment. 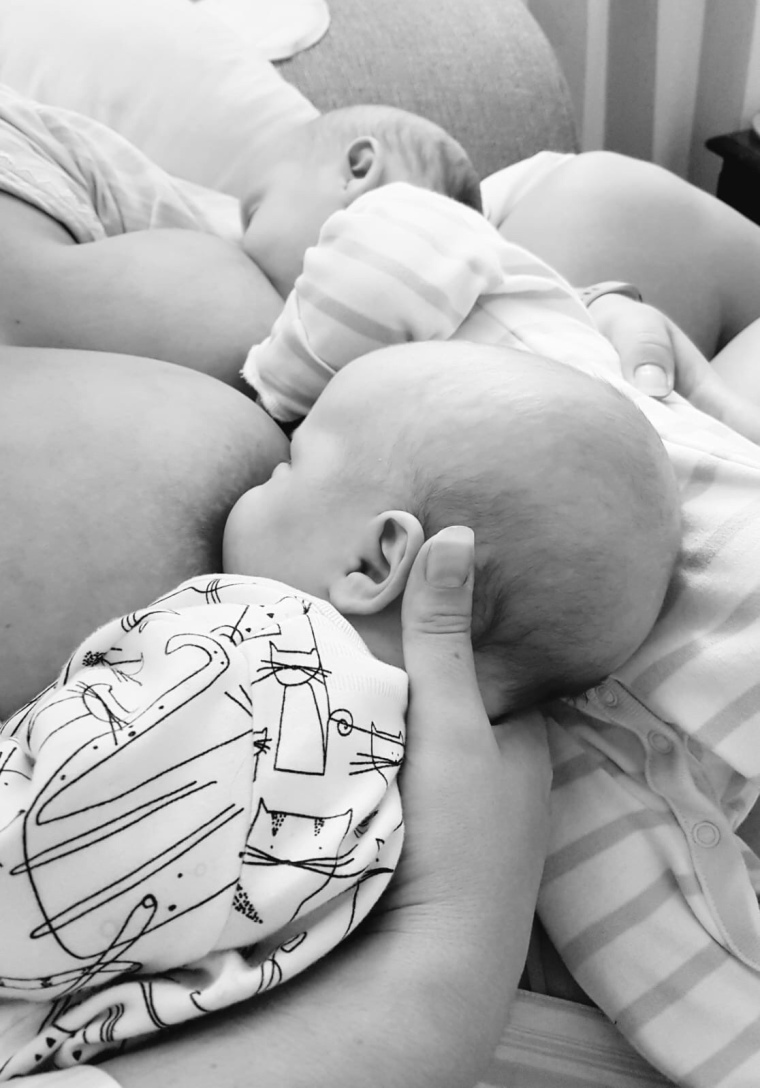 At ten and a half months it came to an end. Partly because of the Babies teeth coming through and becoming distracted by their surroundings, and partly because the supply dropped. It was a sad time for my wife in many ways as it was the last time she will ever breastfeed. But I take my hat off to the strongest woman I’ve ever known, for keeping our babies alive and healthy, through sacrifice and pain for the most crucial time they would need it. It was an immense achievement and I will always be proud of what she physically and mentally accomplished to provide for Ava, Blakely and Lacey.