As a musician, loading up the car in preparation for a gig can become a small headache for me, unless absolutely everything is left in the car from the previous performance , only because I’m not that organised with it, and it takes concentration to remember everything I need , I usually throw everything in the car in a carefree rock n roll manner then hit the road with the stereo cranking, and then turn round ten minutes later and return to the house, possibly more than once because I have forgotten something, much to Stacey and Frankies amusement.

This is what it’s like going out anywhere in the car with triplets. There’s lots of little things that are needed. We load the car up, leave, then I realise I forgot blankets, or hats. There is quite a bit to consider heading out with three babies. Although now we have it down at boss level, my wife muchly more so. 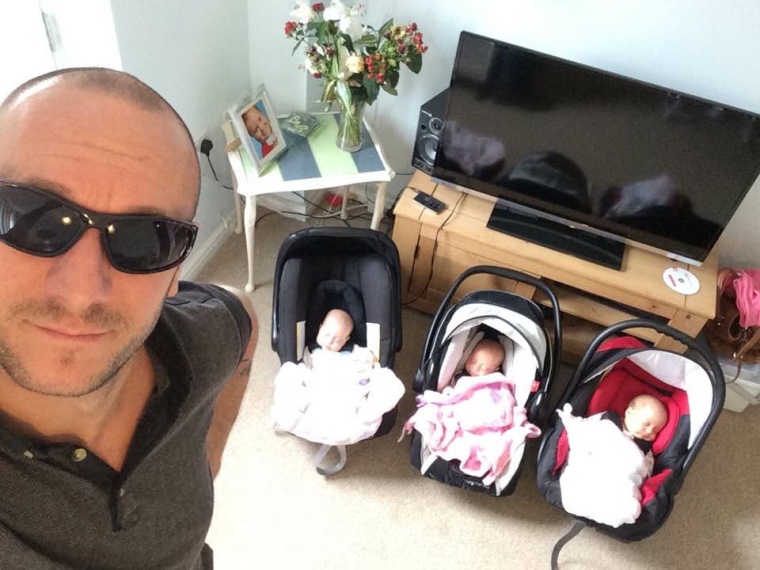 Our first outing was to the little town of Westbay where the series Broadchurch was filmed. It’s not too far, everything is easy to get around so it was ideal for a test run, and as we are English obviously the triplets first outing has to be to the sea-side. Frankie was away that day with family so it was just the five of us.

To be honest the anticipation of that first trip out-weighed the actual event. We only take one change bag with us with the essentials. And a few months ago they were so small we could fit them all in the single pram (we have a single and a twin). And because they are breastfed they only poop once or twice a week at most, wet nappies can be changed easily anywhere.

The trip there, was on occasion rather loud, as our little chickens strengthened their lung functioning in the back of the car. They do relax though with bit of reggae and dance hall. Also the car movement is a good relaxant for them.

We also figured it would be easier to hide them in a single pram as to draw less attention. This didn’t work, at all.

As soon as anyone spotted three in the pram, we were stopped and interrogated. Old ladies especially. People can ask the most personal questions , sometimes out of shock, and sometimes because they just have no filter. I’ll never forget the woman who stopped Stacey in the hospital, and on realising there were three babies, commented on what a massive penis I must have. Surely everyone must know the basics of sex education and how babies are made ? Apparently not.

I do like to see the joy they bring to people though. There is a genuine fascination with them, and not to be biased, but they are beautiful.

It was a lovely day out. Also much-needed for all of us after such a stressful time. We stopped for fish and chips and they stopped for milk. The sun was shining and it couldn’t have been more relaxing.

The one thing I have learned in going anywhere with triplets, is that other than knowing the destination, don’t make any plans or have expectations of what will happen when we get there. Everything has to be played by ear so to speak.

We have since had some lovely stress free trips out with them. And they seem to enjoy it too. At the moment it’s quite easy. So we’ll enjoy while it is.