Stacey and myself were feeling the love. I had never experienced the way I felt when I held those little ones in my arms. Parents will know what I mean. I was also massively relieved that Stacey was now okay. She was in her element. 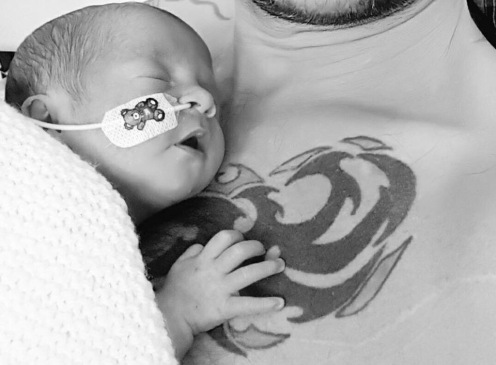 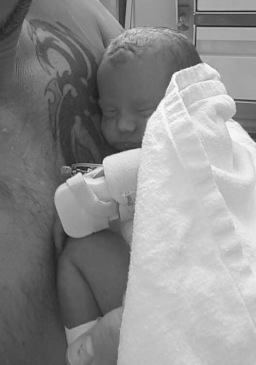 On the outside the girls seemed fine. Blakely did a lot of involuntary arm and leg movements, or in my terms, she was always wriggling. I put it down to the fact she was in the middle for the duration of the pregnancy, so had to constantly fight for room, it was as though she still was.

Occasionally she would stop and just stare at you. Looking into a newborn babies eyes is an incredibly powerful experience. They have a spirit unaffected by fear, or anger, yet to be exposed to the stresses of the stream of life. They have a divine conscious connection with something infinite. All babies are born with it.  Stacey took this photo of Blakely when she was only two days old.

It is routine for multiples to have brain scans at birth. There is a higher risk, especially with mono twins, of underdevelopment. They are, after all sharing a placenta, and one will always be stronger and take more of the vital nutrients.

Lacey was the bigger one, Blakely was our dinky one.

It was around day three the scans took place.  Stacey and myself were busy with all three and busy with visitors. A young doctor stopped me in the hallway outside of the ward in the afternoon,  and asked to speak with Stacey and myself somewhere private, concerning the scan results. I didn’t like the sound of that. My heart sank a little even though we were well aware of the risks from the beginning. We prepared ourselves for whatever was coming.

He told us that Ava and Lacey were fine, Blakely however. had a bleed on the brain. He showed us the printed photo which clearly showed a dark mass on one side of the brain. It was explained that it was most probably caused by trauma during the c-section. The plan was to do an MRI scan the following morning to discover where it was, this would give a clearer picture of how serious it was, and how it would affect her. there was talk of getting her to Bristol st Micheals for surgery asap if need be.

It was difficult to sink in, There were two other babies also that needed our attention and care. We talked and both felt that we would deal with whatever outcome was ahead. Blakely was here, and we were in love with her. I was ready to deal with anything other than losing her.

We were tired and occupied with all three which sort of distracted us. It was on both of our minds though.

The following morning we both went with Blakely across to the main hospital for the MRI scan.  We waited outside, concerned but ready for the results. She was in there for what seemed like ages. At least two more doctors were called into the room she was in. I worried, as that meant second opinions.

She was taken back to the NICU and we were told we would have the results within the next couple of hours. It was a painful wait. I was quietly praying for the strength to deal with any outcome with Blakely.

We stayed with all three and soon the doctor reappeared on the ward and headed our way. He sat down and smiled at us.”Whatever that was on her brain, has gone” he happily announced. “There’s no sign of anything abnormal, the MRI was clear. Shes fine”.

It seems our babies have been taken care of from day one. A nurse on the ward told me she had heard of a premature babies brain sorting itself out on a rare occasion.Blakely had another all clear a few weeks later.

All three are miracles. The little one especially. We were free to get on with the job at hand with three healthy babies. I am fully aware how lucky we are.